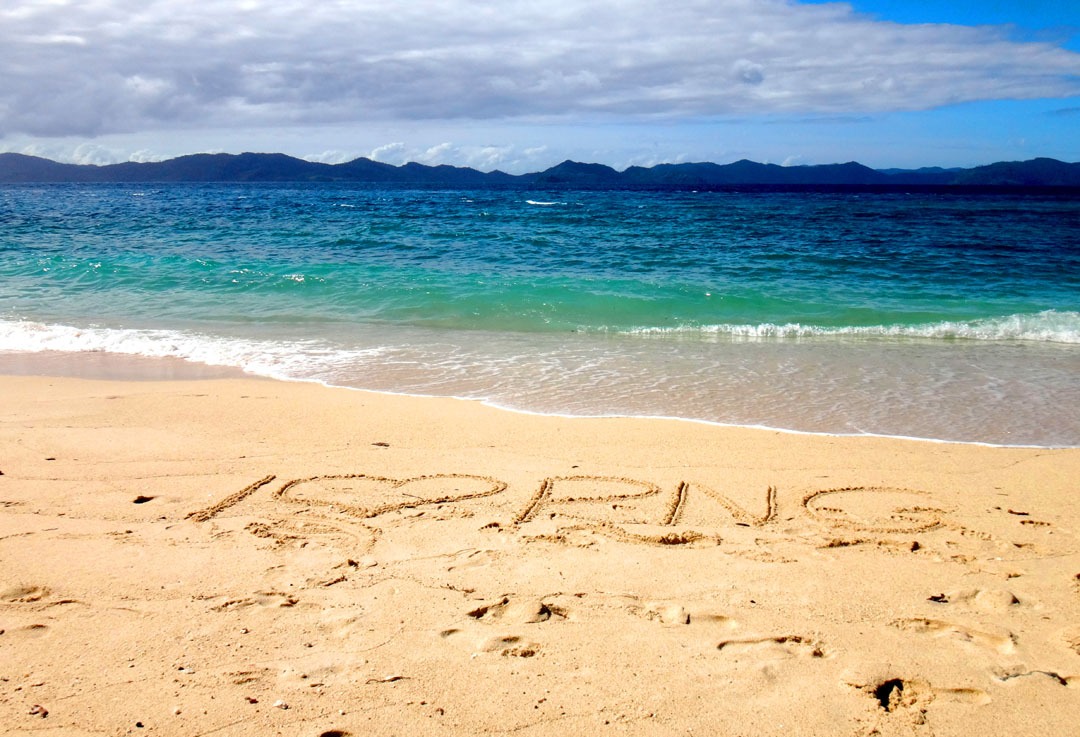 The beautiful resort island of Doini (also known as Blanchard Island) is in the Samarai island group of the Louisiade archipelago in the Milne bay province. It is a privately owned resort (www.doiniisland.com) and before that it was a coconut plantation.

Being it was a privately owned resort island, we thought it was safe enough that I go out ahead of Rosario. The ship was at anchor so the tenders were ferrying us all across to Doini. For those of you who haven’t cruised before, the process of taking a tender means that you get ready, and only then take a tender ticket and wait for your number to be called. I took my ticket and went to get a coke and sat for a while soaking up the surroundings, and the fact I was in PNG!

Due to wind the tender process was a little slower than usual, but for us it was perfect – unknowingly, both of us got on the same tender! The sun was out, we were together and I had my snorkel. I was ready to hit that beautiful beach! The pier funnels you through t o the resort’s bar and shops (I was later told the banana chips were fantastic) before you enter a grassy clearing just behind the beach.


The grassy clearing under the huge old trees was a hive of activity. People from all the neighbouring islands had come to spend the day with us and show us their culture! There was music, market stalls, people selling bananas and coconuts and many, many children! Today I came prepared for children, with my plastic bag full of lollies – good thing as there were hundreds of children, all dressed in traditionally and dancing for us.  I think every child in the surrounding islands got the day off school to come to Doini. 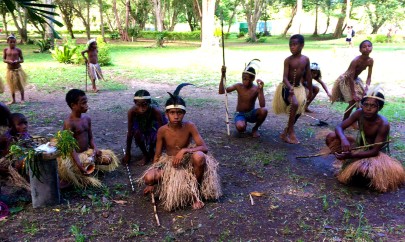 They are so cute! Even with their spears!

A little albino boy. He danced all day long! 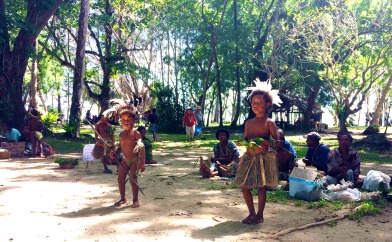 Another group of children.

It’s been said of me that if there is an animal in my vicinity, I will find it and more often than not I will touch it. Yes, with precision timing (literally within the first 10 minutes of being there) I found the cuscus! A cuscus is actually a blonde/ ginger possum. They are native to Papua New Guinea. He was gorgeous and was so tame. Being that cuscus, like any other possum are nocturnal, he just wanted to sit on his perch and go to sleep. His fur felt just like a koala – wiry and soft at the same time. I took some photos and talked to the woman who was with him – it had been a big morning for the little cuscus: they had travelled across from another island by boat so no wonder he was tired! 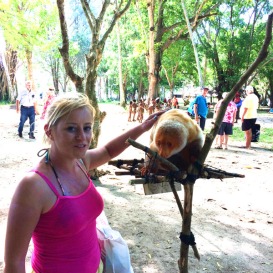 You can see the thought process of the cuscus with these photos.

He really wants me to go away! 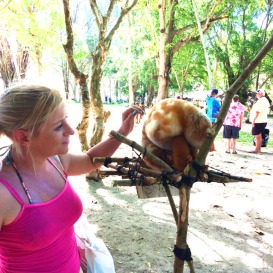 Moving on we came across a local artist, someone making a canoe from a log and many more children. We stopped to take some photos and give some money to a man who was raising money for his family. I found that everybody is extremely friendly, and everyone is interested in knowing your name and telling you theirs.

The sun was strong, humidity was high and by now it was definitely beach time! We found our patch of sand and spread out our towels. Within moments I had my snorkel and flippers and was ready to get in that crystal clear water. For me, snorkelling and watching what is happening under the water is like a drug! My mind goes blank, time stops and I become lost in the beautiful world under the sea. I firmly believe I must have been a mermaid in a past life.

Being the avid snorkeller that I am, I have been in many of the world’s oceans, and everywhere you go is just a little bit different form the last place. This can even be the case between one end of the beach and the other. I wasn’t quite sure what to expect, except that there would be plenty of tropical fish and coral. The first thing that struck me was that the coral was quite different here from anywhere else I’ve been before – soft and gently moving with the water. At first I thought it was sea grass and kept out of the way (while I love snorkelling, I hate seaweed!) however as I approached it I realised that it was not, and small brightly coloured fish were hiding all through it! Lucky for you, my camera goes with me everywhere I snorkel!


We stayed looking at the coral and fish for a long time. I realised it was a long time as my fingers had done all wrinkly! Rosario had to think about going back to the ship so we dried off and walked along the beautiful golden sand. While Rosario went back to the ship, I stayed around and did some photography (did I tell you I sell my photos online? Have a look at shutterstock.com/g/piccola to see my work).


All in all it was yet another beautiful day in a wonderful place. If you ever have the chance to visit the Louisiade archipelago, make sure to set aside a day or even a week to experience the magic of Doini Island.

Until next time somewhere in paradise,